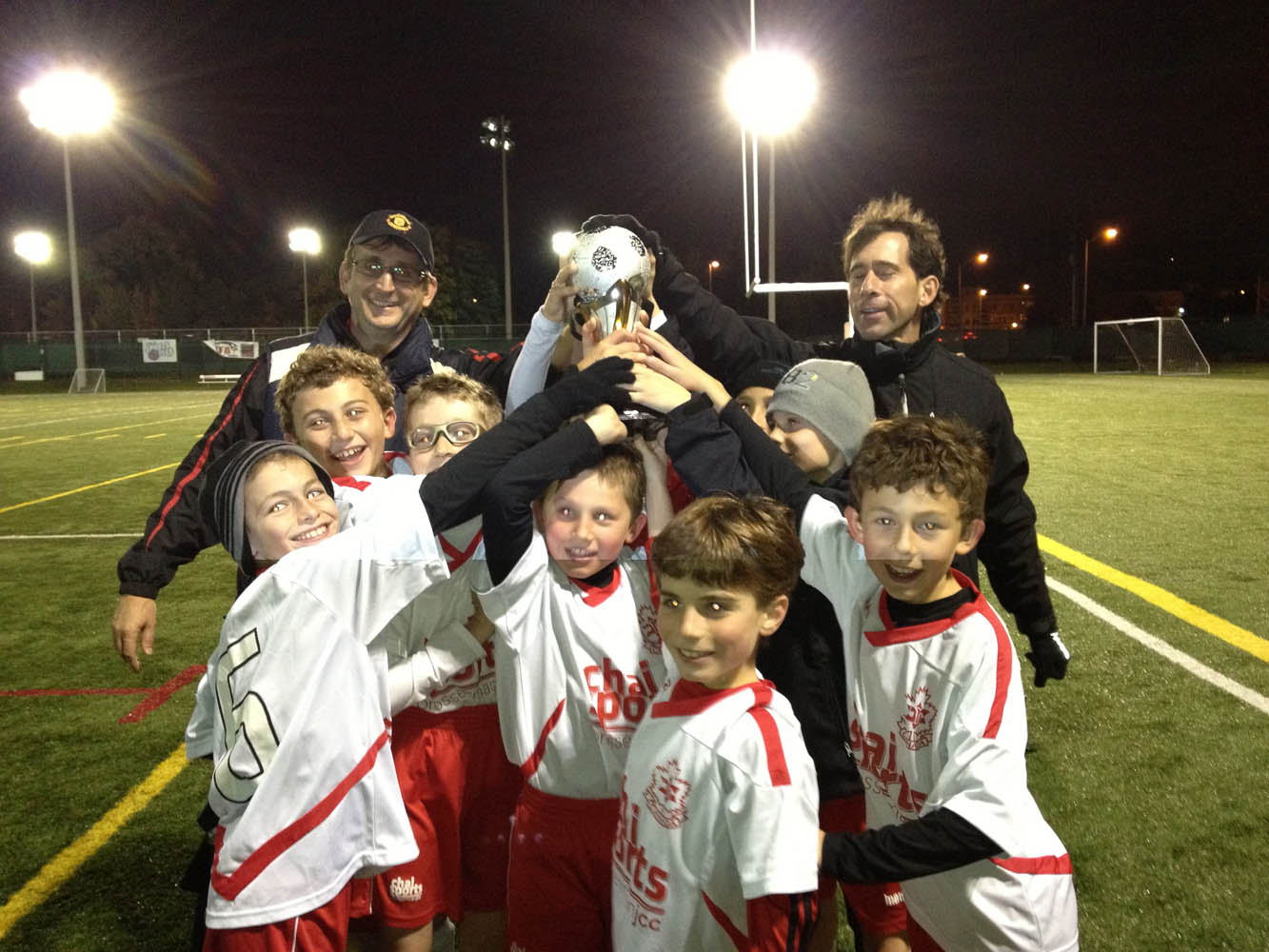 This past decade has seen an unprecedented interest in soccer in North America, starting with David Beckham’s American debut in the MLS, and more recently with the success of the Canadian National Women’s soccer team. Toronto, however, has already seen a long and strong foothold of interest in the game, in large part due to diverse immigrant populations and the resulting cultural enclaves that fervently follow, support, and play the game.

Think no further than Little Italy during the Euro 2012 or during previous World Cup years. What might come  as  a  surprise  to  many  is  that  the  Jewish  community  is  no exception.  From  second  and  third  generations  of  Jews  born  in Canada, to more recent Jewish immigrants from Israel, Russia, South America and South Africa, we have a vast pool of people that not only avidly  follow  the  game,  but  also  of  those  who  play  at  a  very competitive level. The Jewish community boasts a deep reservoir of soccer passion and talent from which to draw in order to pass it on to the next generation. And passing it on it certainly is.

On December 23rd, 2012, the soccer torch was symbolically passed from one generation to the next, as the first ever “elite” Maccabi youth team took on their parents, headed by coaches Jason Mausberg and Gerry Wimmer, in an end of year fun match. Team Maccabi is the creation of a partnership between Maccabi Canada and the Toronto JCC’s Chai Sports. In addition to bringing Jews together through sport, its  mandate  is  also  to  cultivate  excellent  soccer  players  from  the ground up with the goal of competing at elite levels. This will mean eventually having the players poised in a competitive position to obtain university soccer scholarships here and abroad.  It  will  also  mean eligibility  to  compete  for  spots  in  the  annual  North  American  JCC games,  the  Pan  American  Games  in  South  America,  and  the  all coveted Maccabi Games held every four years in Israel.

This summer will mark the 19th Maccabiah in Israel with over 600 delegates going from Canada alone to compete against Jews from over 50 countries. The Maccabi games in Israel are the third largest sporting event in the world. The Maccabi games are not just about competing at an international and elite level in sport though, but are also about the cultural experience of Israel and the coming together of Jews from around the globe. Similarly,  Team  Maccabi  is  not  only about striving for excellence in sport, but is also about creating a small Jewish community within the community, where Jews from all walks of life  can  participate  in  a  pluralistic  environment  that  encourages  a nurturing, constructive, and positive home for kids to learn the game. This  kind  of  environment  is  all  too  often  lacking  in  youth  sport's leagues today. When it comes to competitive sport, people are often skeptical about whether such a nurturing environment can yield the same  kind  of  excellence  as  that  produced  by  the  more  traditional disciplinary approaches.The amazing success of both the youth and adult Maccabi teams speak for themselves.

The results in 2012, the inaugural year for the youth club, have been astounding. The ‘Team Maccabi’ 2002 team finished the last 6 months of the year without recording a loss, and that included playing at least five of the top  ten  teams  in  the  province.  They  finished  the  year  winning  the SAAC  (Soccer  Academy  Alliance  of  Canada)  fall  tournament,  not conceding a goal in five games. This was their third SAAC tournament title in four competitions. In addition, the 2002 team won the Toronto indoor futsal championship after capturing the league title, and were finalists in the March break Hangar indoor competition. The 2003 team completed their first successful year as a team, building from strength to strength. The team had a winning season in their first year in the SAAC league, but what held this team apart was the comradery and respect shown by all the players. There was nothing but support for each other and a great ability to get along in practices and games throughout the year. Sadly, this is often lacking in competitive sports club today.

Finally that brings us to the 2004/2005 aged teams which showed great strength in numbers, and which bodes well for future growth. Coming this spring will be the addition of 2006 players. It  was  a  little  over  a  few  years  ago  that  newly  appointed  Maccabi Canada President and athlete Tommy Bacher sat with seven times Maccabi athlete Jason Mausberg and talked about creating a youth program, a "youth Olympic development program". It is amazing to now see their vision actually come to fruition. Instrumental to making this vision become a reality have been the dedicated parents behind the teams ­ from coaching to organizing to managing. Parents Gerry Wimmer,  Jason  Mausberg,  Mark  Goldberg,  Lorraine  Baumann, Justine  Codron,  and  Tova  Moscoe  have  all  been  vital  keys  to  the clubs’ success. Jason Mausberg coaches and plays on the Maccabi men's open teams while Mark Goldberg is a goal keeper on the over 35 Maccabi team.  In addition, Maccabi players like Gil Vainshtein, Killian Elkinson, Ilya Orlov, Oliver Spring, and Tomer Chencinski have come out to coach the kids. Vainsthein was the captain of the Maccabi Canada  team  which  competed  in  the  Pan  American Maccabi  games  last  year  in Brazil,  Elkinson  was  a  former  TFC  Reserve  team  player,  Orlov represented Canada at the World University games, Spring was CSL reserve defender of the year last season and is spending at least the year in Israel where he is finalizing his contract with a top Israeli club, and Chencinski is a professional goal keeper who has played for TFC, has played in the top professional leagues in Finland and Sweden, and has just signed a 2.5 year contract with Maccabi Tel Aviv.

Many are simply not aware, and this includes the Jewish community itself, what a richness of Jewish soccer talent sits under their very noses. That the youth Maccabi teams have access to this phenomenal pool of talent, both in the form of coaching and soccer role models, should be a source of pride. At the adult level, the Team Maccabi men's team has continued to dominate the leagues in which they play. Gil Vainshtein and Jason Mausberg ­ the organizers, coaches, and themselves players on the team, have built up a reputable dynasty. The team has racked up two indoor league titles, one league cup title, and another finalist title in 2012. Currently, the indoor team has ten players who were chosen to go to Israel next summer for the Maccabi games. The team is sitting in first place in the Premier division at the Hangar.  In  the  summer months, the majority of the top Jewish men's talent plays on the North York  Hearts  soccer  club  out  of  Esther  Shiner  stadium,  where Vainshtein and Mausberg also take to the helm. This year the team won the Ontario Soccer League Premier title with former Yale University sensation Brad Rose winning the golden boot award as leading scorer as well as the MVP title. In addition, Daniel Friedland captured rookie of the year honours for the league. The level of soccer talent in the Toronto Jewish community is on par with if not rivals that of other ethic powerhouses in the city. Toronto also boasts player Daniel Haber, who is in his third year of Cornell, and led all scorers this year in the US college system­ an absolutely remarkable feat. Also from Toronto is Alon Badat, who played with Canada’s  Maccabi  team  last  year  in  Brazil,  and  who  was  recently recruited and transferred to soccer powerhouse Bradely University in the US.

These are just a few more examples of the Jewish soccer riches in our very own community. If we are passing on this soccer legacy to the next generation of kids, then we certainly have a treasure trove with which to work. So now you may ask what happened in the kids versus parents’ game? Well, the kids relished watching their parents sweat it out a little, running and chasing them around, scrambling to compete. The game started off with the kids passing the ball close to fifty successive times before scoring the first goal. The parents, especially the mothers who were playing, gained a new respect for the speed and skill of the game, not to mention a deeper appreciation for the skill level of their sons. In the end, the older generation, as is the case so often, had a few tricks up their sleeves, and the game ended in a crowd-pleasing tie, keeping everyone guessing for next year’s rematch.