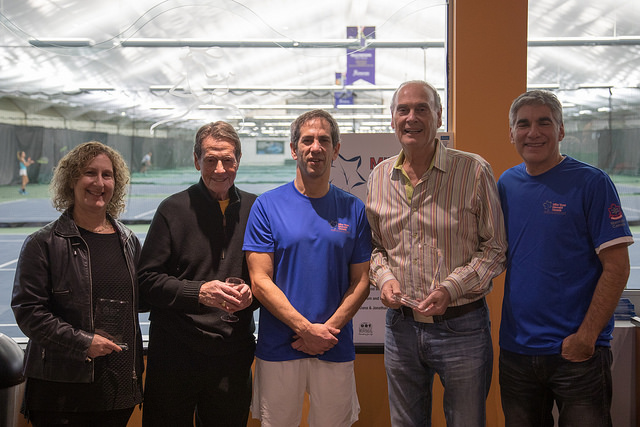 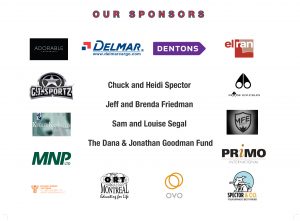 With the 20th Maccabiah Games around the corner, Montrealers came together to participate in the 13th annual Mike Yuval Tennis Classic co -chaired by Chuck Spector and Jeff Friedman.

With 64 players and the support of generous sponsors, this year’s edition raised nearly $33,000 for Maccabi Canada’s Adopt an Athlete program. This brings the total for the three years under Chuck Spector’s chairmanship, since participating in the 19th Maccabiah Games in 2013, to over $111,000.

The Mike Yuval Tennis Classic, directed by Greg Boire, has become the Quebec Region’s marquee fundraiser. Players were treated to an exciting day of action both on and off the court.

Maccabiah athletes, both past and present, were on hand, including special guest: WTA professional and 2005 Maccabiah Games gold medalist Sharon Fichman.

Offering a sneak preview for next summer’s games, three members of Team Canada’s Junior Tennis team: Chloe Fellen, Luka Hollinger and Sarah Levy joined in on the action, along with several Masters athletes: Brahm Faber, Gerald Fried, Paul Horowitz, Paul Lowenstein, Mark Rabinovitch, and Sandor Steinberg; all of whom will be part of the Canadian delegation. The future of Maccabi Canada was represented by Ben Strauber and 11 year old Daniella Miller.

Through the generosity of Mike Yuval, the Tennis Classic has called the Nun’s Island Tennis Club it’s home for the past 15 years. Over the course of the afternoon, participants played doubles tennis on eight courts, with a ninth being reserved for clinics.

In addition to an exciting afternoon of tennis, participants were treated to a wonderful array of food and drink as well as had the opportunity to participate in a raffle and a silent auction, featuring amazing items such as a host of Tennis Canada items, donated by Irwin Tobias, 2017 Rogers Cup experiences and a host of gift cards and items.