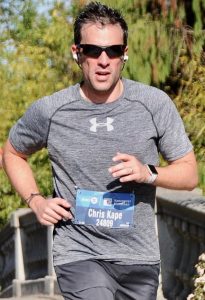 In pop culture, athletes or celebrities crediting life-altering moments to a singular childhood experience has become quite a cliché.

However, when open-heart surgery as a four-year old saves your life as a child and again forty years later - well, that’s a new one.

Vancouver’s Christopher Kape is hoping to run a sub 1:45 Half Marathon at the 20th Maccabiah Games this summer: an impressive goal for any 44-year-old, but at only nine months following thoracic surgery, Kape is probably the most unlikely candidate to be at the starting line this July.

But then again, he’s been beating the odds his whole life.

At the age of four, he underwent surgery at the Montreal Children’s Hospital for an atrial septal defect, commonly referred to as a hole in the heart. Even when successful, the procedure caused tremendous scar tissue and a high potential for future complications.

Kape was lucky to only have minor complications and developed into a strong recreational runner for the better part of 25 years. Having worn out hundreds of pairs of shoes while logging thousands of miles, once he hit his 40’s, he began to slow down. He was convinced that this was his body was telling him to find a new hobby.

“I’m by no means a professional athlete, I’m someone that always stayed in shape primarily with running, but I was getting tired a lot and had already given up on it a couple of years ago.”

Kape would soon undergo a chest scan simply as a routine follow-up as a 4 year-old heart surgery patient.
“My cardiologist gave me the good news: he said my heart was in perfect shape, but there was a mass, that had to be looked at,” he recalled. “If it was not for the scan, it would have been a few more years until I felt the compression in my chest due to the tumour’s size.

An operation was scheduled for September 28, coincidentally, Maccabi Canada’s registration deadline for the Games. Tests would indicate that the tumour was malignant.  With the proverbial and physical weight lifted off his chest, Kape was reborn.

“All of the sudden, I had boundless energy. Within one day, I was walking to the Starbucks across the street from the hospital – something the nurses were astounded by.  The next day, I was released early due to a quick recovery.  Now, I’m running 20 kilometers every weekend. I’m like Forrest Gump, I keep running and running.”

“I made it my mission to participate in as many experiences as possible in 2017 and beyond. Everything is finite and time is the only currency we have so we all might as well get going on fulfilling our plans.”

Yet, even upon Kape’s release from the hospital, the Maccabiah Games were still not on his radar, but that of his son’s, an elite goalie. Despite knowing about the Games his whole life, until he became of Masters age, he never had a vehicle in which to participate. However, with his new lease on life, the 20th Maccabiah quickly became his goal.

“I missed the registration deadline, but fortunately, an exception was made,” joked Kape. “My goal is just to compete and finish, hopefully inspiring others, including my family, that it is never too late to try something.  I also really don’t want to come in last so I am training extra hard these days.”

Whether he medals or crosses the finish line at sunrise, his new attitude is evident in every word and action. It brought Kape and his two oldest children to Uganda on a recent good-will mission and it’s also what drives him to compete on behalf of Canada at the Maccabiah Games.

While most would complain and agonize about the incredible challenge ahead, Kape will undoubtedly soak in the moment: running a brisk 21 kilometers, in the Jewish Olympics, in the eternal capital of the Jewish people.

“Competing in the Maccabiah Games is something that I’ve always wanted to do, but I have my work cut out for me,” he said. “[The race] is going to be super hot and uncomfortable, but who can complain about that for some guy that had Thoracic surgery six months ago?”